On Divine Mercy Sunday faithful urged to trust in Christ’s mercy, pass it on 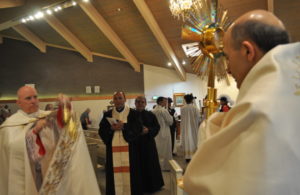 On April 23, Divine Mercy Sunday, hundreds of people turned out at St. Rafka Maronite Catholic Church for a celebration that offered the chance to earn a plenary indulgence and to be inspired by religious leaders to share Christ’s mercy with others.

The day included the opening and closing of a Holy Door at the Lakewood church, and a Divine Liturgy (Mass) celebrated by Maronite Bishop Elias Zaidan and concelebrated by St. Rafka pastor Maronite Father Andre Mahanna, who founded and heads an apostolate to aid persecuted Christians. Archbishop Samuel Aquila delivered a message on Divine Mercy. 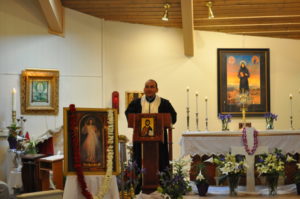 To help people earn the indulgence (remission of punishment due for sin), the sacrament of reconciliation, Eucharistic adoration, and veneration of the Divine Mercy image were available. The iconic image with the words “Jesus, I trust in you,” shows the risen Christ giving a blessing while rays of light (red for Eucharist, white for baptism and reconciliation) stream from his breast.
Other events included a brunch with ecumenical leaders that featured multicultural entertainment, including Jewish, Indian and Samoan dancing and music, and an inter-Christian dialogue that focused on helping persecuted Christians in the Middle East.

“The 2016 Open Doors report on persecution found that 215 million Christians experienced hostilities of some form over the past year,” Archbishop Aquila told the congregation. “Sadly, one only needs to look to the recent Palm Sunday bombings in Egypt that were claimed by ISIS to see the flesh and blood reality of the suffering Church: 49 dead and 78 injured.

“In the face of our afflictions, how should we respond as Christians?” he asked. “By immersing ourselves in Divine Mercy and carrying it to others.”
Christ’s passion, death and resurrection show that submission to and trust in God’s will and goodness yields eternal victory, the archbishop said.
“Divine Mercy,” he added, “… can transform our country and the world.”
In the year 2000 St. John Paul II designated the Sunday after Easter as Divine Mercy Sunday and canonized Sister Faustina Kowalska. The Polish nun had died in 1938 and is called the Apostle of God’s Mercy as it was through her writings the message and devotion to Jesus as “The Divine Mercy” came to be known.
“At the heart of Jesus’ message to St. Faustina is the necessity of complete trust in Jesus’ mercy for all who seek it,” Archbishop Aquila said, adding that Christ told Faustina: “’The graces of my mercy are drawn by means of one vessel only, and that is—trust. The more a soul trusts, the more it will receive.’”
St. John Paul II, the archbishop said, noted that Jesus’ message of mercy isn’t new, “’but can be considered a gift of special enlightenment that helps us to relive the Gospel of Easter more intensely, to offer it as a ray of light to the men and women of our time.’
“The work of building a culture of mercy, of building the Kingdom of God, is needed everywhere,” the archbishop said. “It must be done on the streets of Denver, in the highways and byways of every corner of our country; it must be done in Lebanon, Syria, Iraq and Afghanistan. And most importantly, it must be done in your homes and in your families.”
The inter-Christian dialogue, which in addition to the bishops and Father Mahanna, included representatives of the Church of Jesus Christ of Latter-Day Saints, a Syriac Orthodox deacon, and evangelical laymen who work to educate and empower inner-city youths and families, discussed past and current collaborative works of charity and mercy to help victimized Christians in the Middle East and urban needy in the United States. 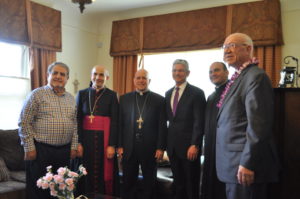 The Maronite Church is Eastern Catholic and in communion with the pope. It traces its roots to the Apostles’ visits to Antioch where followers of Christ were first called Christians (Acts 11:26). The Maronite patriarch (senior religious leader under the pope) is in Lebanon.
“As you know, the Middle East is where Christianity started. Unfortunately, waves and waves and waves of persecution over the centuries has pushed Christians out,” Bishop Zaidan told the group. “I hope the little tiny remnant still there will be respected. We hope their voice will become your voices … to make sure this country will do whatever it can to preserve Christianity in the Middle East.”
Father Mahanna wrapped up the discussion with a call to action.
“What are we trying to achieve?” he asked. “A network of common causes to enable (us all) to defend life from conception to natural death.”
Echoing Archbishop Aquila’s comments on building a culture of mercy, he added, “It will be a new movement—the new wind to flow all over.”