IN THIS ISSUE:
– IDC Team in the Middle East
– IDC Advocacy and Awareness work
– IDC in the News
-IDC Chapters Activities
-IDC Upcoming Events
-IDC at the United Nations

March 7-16 the IDC team visited Lebanon and Iraq, meeting with religious and community leaders as well as displaced Christians relocated from the conflict zones of Iraq and Syria. The trip was a follow-up to the nearly 300-page report IDC published on March 10th, in collaboration with the Knights of Columbus, which became a basis for the United States Department of State’s designation of genocide for Christians and other religious minorities under ISIS.

IDC President Toufic Baaklini, Executive Director Kirsten Evans, Director of Government Relations Kristina Olney, and Board Member Alexis Moukarzel hand-delivered the document to over half a dozen leaders of churches, as well as Middle Eastern Christian political leaders in both countries. Additionally, the team visited the refugee camps in Erbil, Iraq run by Shlomo, whose exceptional work chronicling the Christian community displaced by ISIS was an indispensable resource for the March 10 report.

The overwhelming feedback the team received from religious leaders, political leaders and refugees alike was the same: we need aid, we need protection, and we want to return to our homelands.

You may browse through the photos of IDC team’s trip to Lebanon and Iraq here
IDC Senior Advisor Andrew Doran presents “Christians in the Middle East: Surviving ISIS and Global Indifference” and the “Christian Genocide: Evidence for Its Designation and Saving Christianity in Iraq.”
On April 6, 2016 at the Aquina Institute in Denver, Colorado, Doran discussed Christianity in the Middle East, the political and cultural challenges believers face today, ISIS and extremism, resurgent Islam, and U.S. foreign policy. You may listen to the lecture by Andrew Doran here.

On April 20, 2016 at the Westminster Institute in McLean, Virginia, Doran presented IDC’s nearly-300 page report on the ongoing genocide in the Middle East, which was presented to Secretary of State John Kerry on March 9, 2016 (read the full report here), and expounded on the next steps necessary to preserve the at-risk Christian communities in Iraq.
You may listen to the lecture by Andrew Doran here.

IDC Haven Project Managing Director Steven Hollingshead discusses a haven for Christians in the Nineveh Plain
IDC was recently represented at the IRF Roundtable’s 4th Annual Event on March 22nd by Stephen Hollingshead, IDC’s Managing Director of the Haven Project, who discussed the recent genocide declaration and the future of creating a safe haven for Christians and other religious minorities in the Nineveh Plain. The event, which was attended by many experts on Religious Freedom domestically and internationally, was also presided by former Presidential Candidate and Senator Marco Rubio (R) and Congresswoman Anna Eshoo (D) who were both awarded the Thomas Jefferson IRF Champion Award.

On April 12, 2016 Hollinghead also represented IDC at the Institute of Global Engagement where he discussed the definition of genocide, the desire of Christians to live in a safe haven in the Nineveh Plains region, how to secure this region, what the U.S should do in support of Christian soldiers and why it is in Iraq Kurdistan’s interest to have a safe haven for Christians and other minorities in the Nineveh Plains. 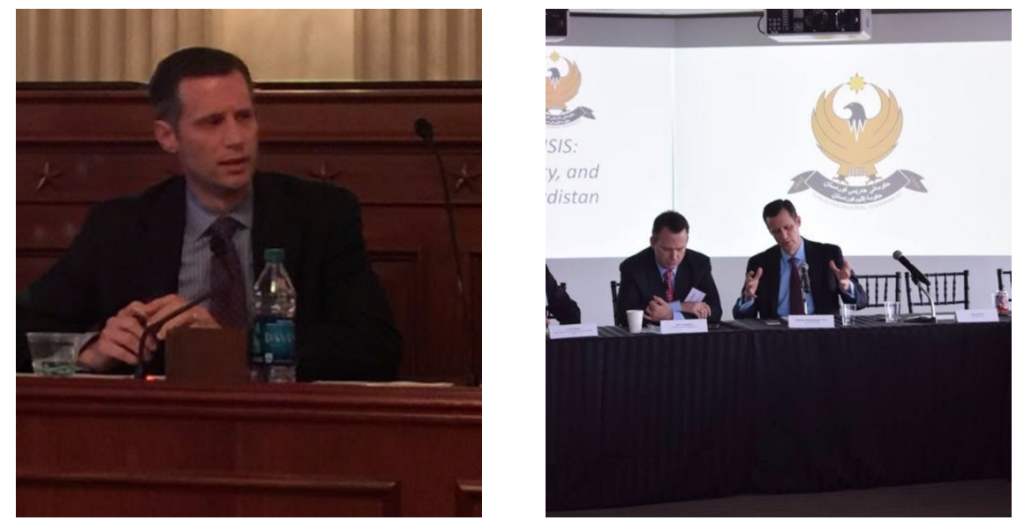 Stephen Hollingshead, IDC’s Managing Director of the Haven Project, at the IRF Roundtable’s 4th Annual Event and Global Engagement discussing many of the issues facing Christians in Iraq.

IDC Partners With Family Research Council
IDC recently partnered with the Family Research Council and other leading international religious liberty groups such as Open Doors USA, the Institute for Religion and Democracy, the 21st Century Wilberforce Initiative, and Voice of the Martyrs in a call to American churches to stand with the international persecuted church. Nearly 40,000 U.S. churches were invited to participate in Stand with the Persecuted Sunday on April 17. Churches were encouraged to show an informational video to their congregations, distribute special bulletin inserts on persecuted Christians around the world, and spend time in prayer for our persecuted brothers and sisters.

Kirsten Evans, Executive Director of IDC, commented that: “IDC is grateful to all of the individuals and communities across the country who will ‘Stand with the Persecuted’ on Sunday, April 17th. Today Christians in Iraq and Syria are facing genocide at the hands of ISIS. The international community must respond not only to protect the communities victimized by these crimes and relieve their suffering, but to ensure their eventual peaceful resettlement of their rightful homelands.” 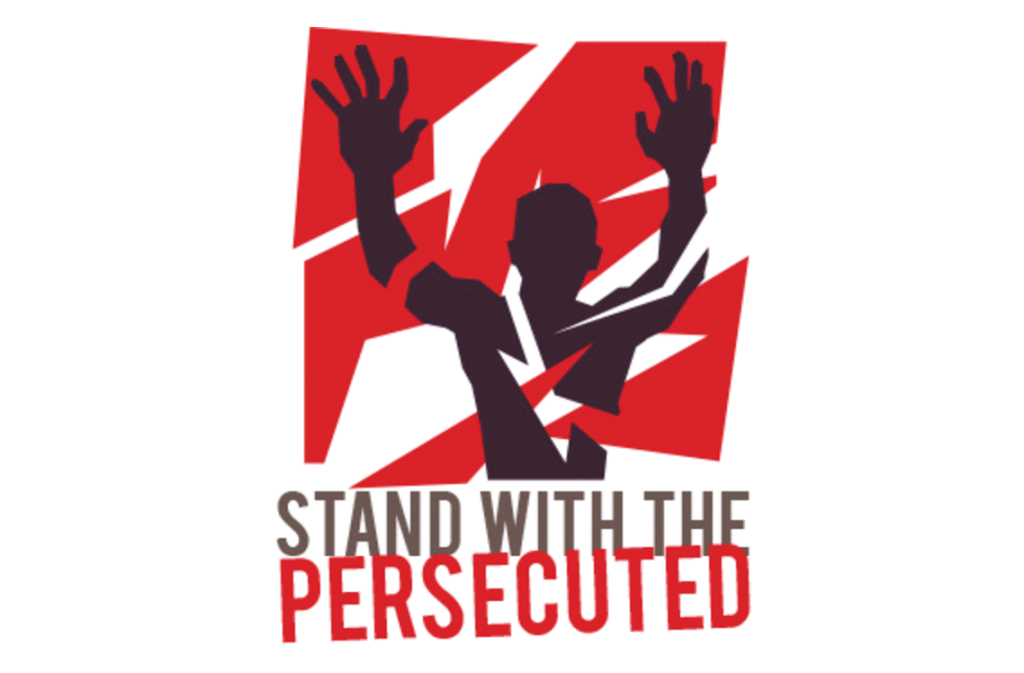 IDC Senior Advisor and Producer Jordan Allott raises awareness about the Christian genocide through his documentary “Our Last Stand” in partnership with IDC.

IDC Senior Advisor and Producer Jordan Allott raises awareness about the Christian genocide through his documentary “Our Last Stand” in partnership with IDC.

European Parliament
On April 5, 2016, a pre-screening (rough-cut) of Our Last Stand was shown for the first time in Brussels, Belgium at a conference hosted by the European Christian Political Movement (ECPM) in partnership with the Transatlantic Christian Council.

The conference was attended by European parliamentarians from Holland, Slovakia, and other EU member states, as well as experts from the Middle East, Europe and the US (including In Defense of Christians). The conference addressed the current crisis affecting the Christian communities in Syria and Iraq. IDC’s Executive Director Kirsten Evans spoke to the gathering on the current situation of Christian communities in the Middle East.

The film Our Last Stand, which provides firsthand accounts of the plight of Christians living in Iraq and Syria, was viewed after speakers urged western governments to embolden their aid and resolve to protect Christians experiencing a genocide at the hands of ISIS.

Pictures above are the screening of Our Last Stand at the European Union Parliament.

Steubenville, Ohio
In partnership with IDC, IDC Senior Advisor and Producer Jordan Allott and Co-producer Assyrian American activist Helma Adde presented segments of the film “Our Last Stand” at the Franciscan University in Steubenville, Ohio on March 18 and spoke to students and faculty, about the plight of Christians in Iraq and Syria.

This first-of-its-kind documentary will inform westerners, especially Americans, about the existence of these ancient Christian communities (Assyrian/Syriac/Chaldean), the threats they face and the crucial role these communities play in the Middle East.

Houston, Texas
Also on April 5, 2016 Our Last Stand director Jordan Allott was invited to speak and present a rough-cut of the film in Houston, Texas. About 120 people came to St. Michael’s Catholic Church to learn more about how Christians are persevering in Iraq and Syria, despite the genocide they face.

The screening of a rough-cut Our Last Stand in Houston, Texas at St. Michael’s Catholic Church.

IDC board members and staff discuss the significance of the recent United States Department of State Genocide Declaration to the Middle Eastern audience. 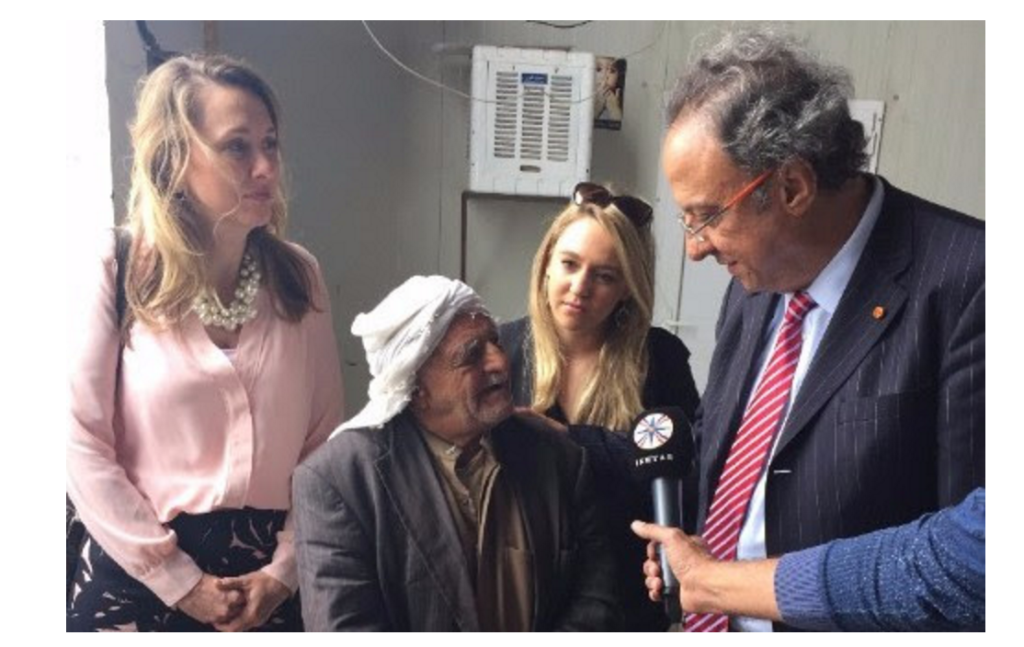 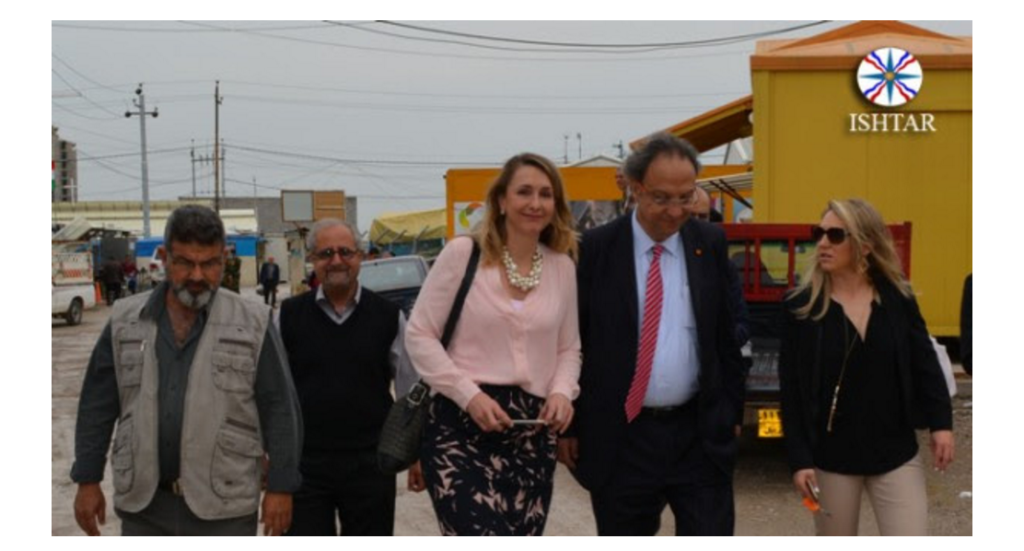 Ishtar TV online: Visit to the offices of In Defense of Christians in Washington DC 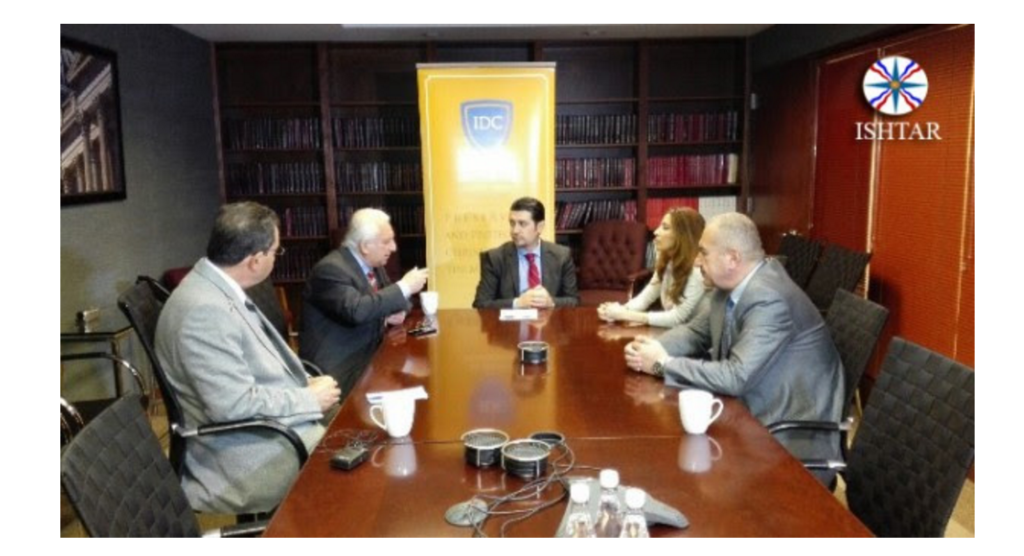 Breitbart Radio interviews Kirsten Evans on the significance of the recent US Genocide Designation and why it matters to American Christians.

National Review: “Genocide: The Weight of a Word“
IDC Executive Director Kirsten Evans writes about the genocide report done by the Knights of Columbus and IDC and presented to the State Department and the significance of the Unites States of America acknowledging the genocide.
National Review: “America’s Gulf State ‘Allies’ Have Created a Humanitarian Disaster in Yemen“
IDC Senior Advisor Andrew Doran writes about the ISIS execution of the sisters of the Missionaries of Charity in Yemen, the country’s civil war and America’s relationship with the Gulf States.

In Defense of Christians’ Arizona chapter is proud to have drafted this memorial and worked closely with Senator Barto to ensure it was adopted on the floor. Copies of the memorial will now be transmitted to President Barack Obama, Speaker Paul Ryan, Minority Leader Mitch McConnell, and every member of Arizona’s own congressional delegation.

The evangelical and Catholic communities of Denver, Colorado came together to work on getting the resolution passed, and Fr. Andre Mahanna, pastor of St. Rafka Maronite Church and IDC member, opened the session at 9:00 AM with prayer. The resolution was read and the entire house stood in awe and respect in respect of the martyrs, and it later passed unanimously, receiving a standing ovation when it was announced by the Madame speaker. 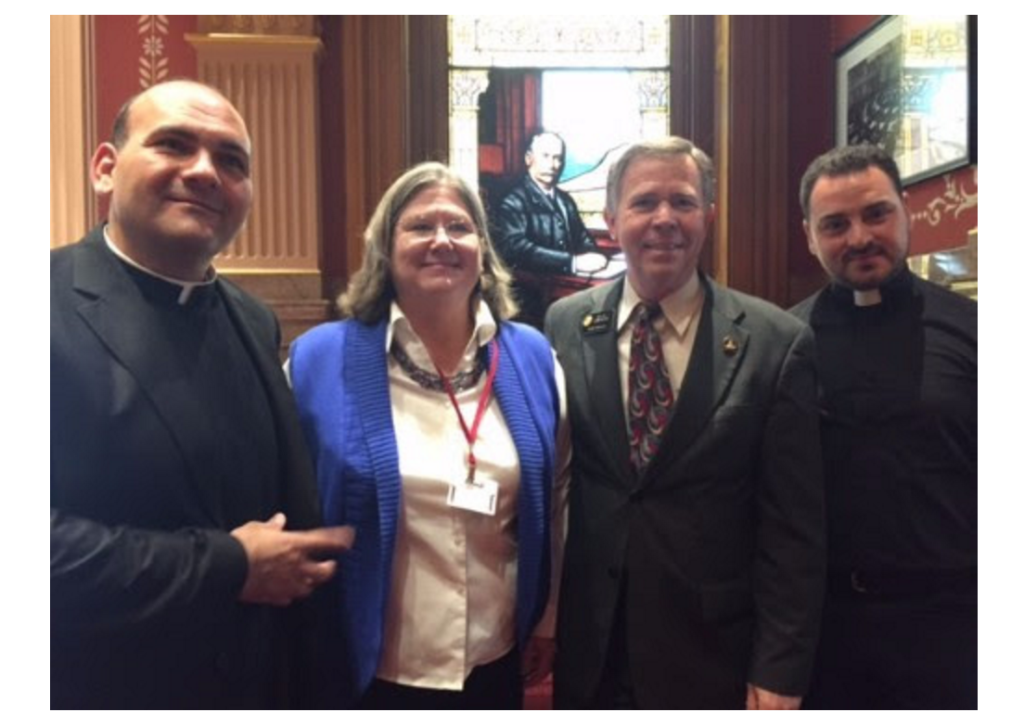 From left to right: Father Andre Mahanna, Beth Folsom, coordinator with the Mission of Hope and Mercy for protocol with Evangelical communities and the State Senate and the House, Colorado State Senator Lundberg,HJR 16- 1013 sponsor, and Fr Joe Daccache, St Peter and Paul Maronite Mission administrator in Semi Valley California.

IDC Director of Media and Communications Ninar Keyrouz to attend Wichita Chapter’s first official meeting and to introduce IDC in Oklahoma City
Following the success of the “Power and Persecution” Symposium run in coordination with St. George Orthodox Christian Cathedral with over 300+ attendees, IDC will hold its first official chapter meeting May 5th in Witchita with more than eighty new members.

Head by the Very Reverend Fr. Paul O’Callaghan of the St. George Orthodox Christian Cathedral and Ms. Keyrouz, this meeting will look at ways to help the national office in Washington DC and advance the cause of Christians in the Middle East which IDC fights for. Following the meeting will be a luncheon.

The following day, May 6th, in Oklahoma City, Ms. Keyrouz, Fr. John Salem of St. Elijah’s and other pastors will run a meeting introducing IDC and preparing for the establishment of a new chapter there. 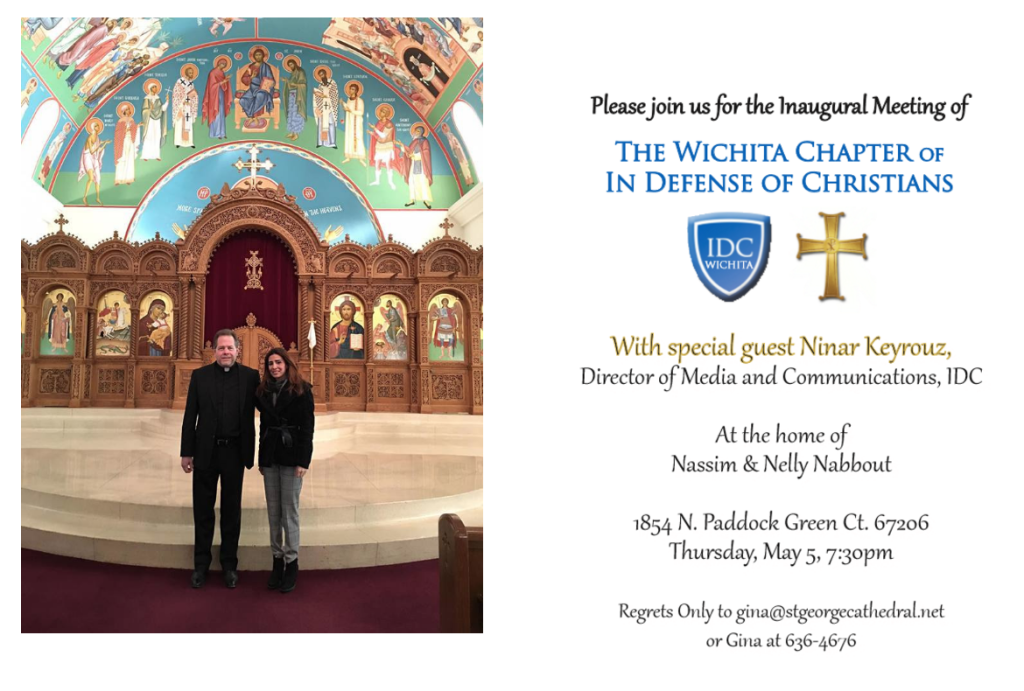 IDC at the the Diocese of Phoenix and the Chaldean Catholic Diocese of St. Peter Event

On May 3, at 7pm at Xavier College Preparatory, Bishop Thomas Olmsted of the Diocese of Phoenix and the Chaldean Catholic Diocese of St. Peter is are hosting Father Douglas Bazi from Erbil to highlight the plight of his community and the Christians he is advocating for–and to help raise funds to support them.

IDC will be represented by its member Bill Fathauer who will introduce IDC’s work for attendees from the Iraqi Christian community in Phoenix as well as supportive members of the Roman Catholic, Eastern Catholic, and Protestant communities.
IDC Colorado Chapter announces the 2nd Annual Ecumenical Prayer Breakfast, Denver, CO on May 2, 2016
Along with Orthodox, Evangelical and Protestant religious leaders, their Excellencies Archbishop Samuel Aquila, Archdiocese of Denver Colorado, and Bishop Elias Zaidan, Eparchy of Our Lady of Lebanon, will lead this celebration. Fr. Andre Mahanna, Pastor of St. Rafka Maronite Church, religious leaders and others will stand in solidarity and draw awareness to modern-day martyrs and refugees.

The Ecumenical Prayer Breakfast comes in line with the PLACE Initiative and is inspired by the courage of Pope Francis and the Eastern Patriarchs of Constantinople, Moscow, and Alexandria, and as response to the urging call of The Assembly of Catholic and Orthodox Patriarchs and Bishops of the Middle East in Lebanon.

The Ecumenical Prayer Breakfast is a powerful way to promote and pursue unity, especially in the face of the global persecution of Christians and in light of the recent passage of H. Con. Res. 75 by the U.S. House of Representatives and the HR 16-1013 of the State of Colorado declaring as genocide the atrocities against Christians and other minorities in the Middle East.

The date is set for May 20, 2016 at St. Rafka Maronite Church Grounds, 7-9 AM.
Contact: www.savechristianmiddleeast.org
IDC to Co-sponsor #WeAreN2016 Event at the UN with the Holy See Citizen Go and Mas Libres
From April 28th – 30th 2016, IDC will co-sponsor an event at the United Nations titled “#WeAreN2016: Defending Religious Freedom and other Human Rights, Stopping Mass Atrocities against Christians and other Believers”.

In this event, we will hear from experts, including IDC President Toufic Baaklini, Executive Director Kirsten Evans, and Haven Project Managing Director Stephen Hollingshead, witnesses, and victims of the atrocities and exodus suffered by Christians and other minorities in Syria, Iraq, Nigeria, and other countries.

To View the Program and Register for this Event, Please Click Here.