IDC Congratulates the House on Designating ISIS Violence Against Christians, Other Minorities as Genocide

IDC Congratulates the House on Designating ISIS Violence Against Christians, Other Minorities as Genocide.
Implores the State Department and the White House to Follow Suit

Washington, D.C.- Today, March 14, 2016, the United States House of Representatives voted overwhelmingly (unanimously) in support of House Con. Resolution 75, which names and decries ISIS violence against Christians, Yazidis, and other ethnic and religious minorities as genocide. The historic vote passed unanimously. The bill passed with 393 yeas and no nays.

Today’s watershed moment in calling the crisis genocide is the result of months of close collaboration between In Defense of Christians (IDC), Representative Fortenberry (R-NE), Representative Anna Eshoo (D-CA), the Knights of Columbus and other activists, religious scholars and human rights experts to garner political support for the initiative.

Fortenberry announced the resolution at an IDC National Leadership Conference on 10 September 2015, the day after he had introduced it to the House.

In advance of the vote, Congressman Fortenberry said, “A genocide designation will raise international consciousness and compel the international community of responsible nations to act, setting the preconditions for the reintegration of ancient ethnic groups and faith traditions into their ancestral homelands.” Fortenberry added: “Christians, Yezidis, and other beleaguered minority groups can find new hope in this trans-partisan and ecumenical alliance against ISIS’ barbaric onslaught.” 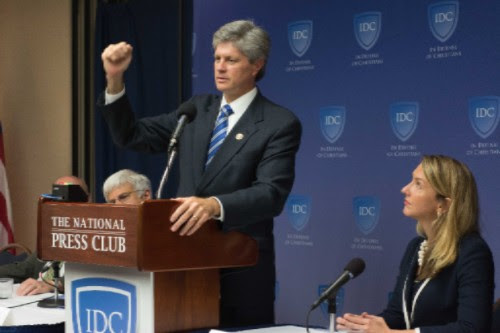 Today, IDC Executive Director Kirsten Evans made the following statement: “We applaud Congressmen Fortenberry and Eshoo’s tireless leadership, as well as the House’s designation of the plight of persecuted, enslaved and murdered Christians and other minorities in the territories under ISIS control as genocide. We now implore the State Department and the White House to follow suit and to join the international community in doing so. The United States must condemn these barbaric and criminal acts and ask for the responsible parties to be brought to justice in an international court. The United States cannot stand silent on the sidelines meanwhile our allies and the international community respond with requisite moral courage in the face of this human rights catastrophe.”

To date, the European Parliament, the United States Commission on International Religious Freedom, the United National Human Rights Commission, as well as government bodies in Iraq and elsewhere have designated the situation facing Christians and other minority groups in the region as genocide.
Using the word matters.

History shows that designating a crisis as genocide can bring about swift international action, as the world witnessed when NATO used the word to describe events in Kosovo and Bosnia. The killing stopped. Failing to do so, because of ignorance or lack of political will, results in the human tragedies of Rwanda, Cambodia, and Darfur, as leading international expert on genocide Dr. Greg Stanton has said.
Last Thursday, IDC and the Knights of Columbus released an extensive report, chronicling the genocide of Christians, Yazidis and other ethno-religious minorities in territories controlled by ISIS and its affiliates in Syria, Libya and Yemen.

The nearly 300-page report, “Genocide against Christians in the Middle East”, resulted from a State Department request for specific evidence related to crimes committed against Christians by ISIS and was sent to Members of the House of Representatives in advance of today’s vote. Submitted to Secretary of State John Kerry on 9 March, the report was compiled from evidence of a recent fact finding mission to Iraq, which documented the murder, injury, enslavement and displacement that Christians have suffered at the hands of ISIS. 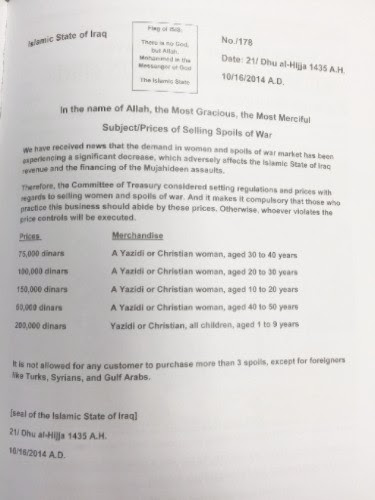 From the Genocide Report by IDC and the Knights of Columbus: ISIS Released Document on Prices of Selling Spoils of War. Includes prices for selling Yazidi and Christian women that were never shared before.

IDC President Toufic Baaklini made the following statement upon the report’s release:
“The report makes it undeniably clear that [Christians] are victims of genocide, targeted specifically because of their faith. The report has unearthed many stories that the world has not heard. Like the story of Christian women who have been forced into sexual slavery and listed on ISIS slave menus that put a price on ‘Christian or Yazidi’ women by age. Stories of women like Claudia, who was captured and raped several times after ISIS militants spotted her tattoo of a cross…What is publicly known, and what our investigation uncovered is substantial, but it has become clear that this still represents only the tip of the iceberg.”

Today’s historic vote, taken just days after the release of this report, is also a precursor to a congressionally-mandated deadline for the State Department to make a determination as to whether the persecution of Christians and other religious minorities in the Middle East will be designated genocide. State is required by law to do so by this Thursday, 17 March.

Fortenberry and Eshoo, Co-Chairs of the Religious Minorities in the Middle East Caucus, made a joint statement shortly after the resolution was introduced to the House: “We’re witnessing the systematic extermination of Iraq and Syria’s entire ethno-religious minority populations and the atrocities perpetrated against each of these vulnerable groups shock the conscience of civilized humanity.”

Polls show that more than half of United States citizens agree. Fifty-five percent of Americans support calling ISIS violence against Christians and other minority groups genocide, according to a 2015 K of C-Marist poll.

And to date, more than 100,000 Americans have signed the ‘Stop the Christian Genocide’ petition launched by IDC and the Knights of Columbus urging Secretary Kerry to designate the crisis as genocide. The petition is being promoted with a new nationwide TV ad that cites Hillary Clinton, Ted Cruz and Marco Rubio all naming what is happening to Christians in the Middle East at the hands of ISIS as genocide. 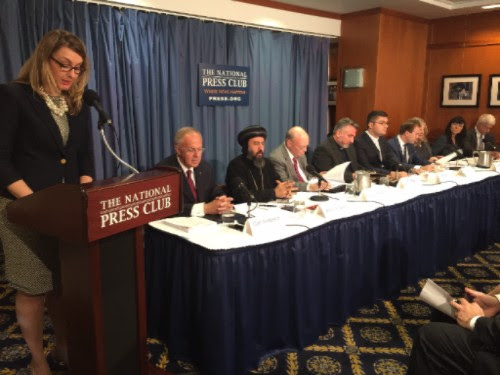 In Defense of Christians (IDC) is a nonprofit, nonpartisan organization committed to the preservation and protection of Christians in the Middle East.