Washington, D.C.–In Defense of Christians (IDC) and the Knights of Columbus released an extensive report this morning chronicling the genocide of Christians in territories controlled by the Islamic State (ISIS) and its affiliates.

The nearly 300-page report, “Genocide against Christians in the Middle East”, resulted from a State Department request for specific evidence related to crimes committed against Christians by ISIS. Submitted to Secretary of State John Kerry yesterday, the report was compiled from evidence of a recent fact finding mission to Iraq, which documented the murder, injury, enslavement and displacement that Christians have suffered at the hands of ISIS.

The announcement of the report’s release was made at a packed National Press Club conference and included a panel of representatives from IDC, the Knights of Columbus and other esteemed scholars and activists as well as Christian clergy from United Kingdom and Iraq.

Ahead of the press conference IDC’s President Toufic Baaklini said, “A genocide designation by the United States cannot wait any longer. The atrocities that commenced nearly two years ago have been broadcast to the world, and the United States still stands silent as the international community and the American people continue to raise their voice. To date nearly 65,000 Americans including a number of high-profile public figures have signed the ‘Stop the Christian Genocide’ petition launched by IDC and the Knights of Columbus.” Baaklini continued that “It is time for the United States join the rest of the world by naming the genocide and by taking action against it as required by law.” Read Baaklini’s full statementhere.

The panelists also urged President Obama and Secretary Kerry to officially designate the crimes being committed by ISIS against Christians as genocide. So far, the administration and State have been resistant to do so, said Nina Shea, Director of the Hudson Institute’s Center for Religious Freedom. “Some State Department officials seem to believe that Christians within ISIS territory are being respected as people of ‘the Book’,” stated Shea.

As the report demonstrates, ISIS adheres to a fundamentalist interpretation of Islam and believes that Christians don’t qualify for the historic protection offered by Islamic law. The notion that Christians are being given the option to pay the jizya tax is ISIS propaganda. Christians cannot pay a tax when everything they have has been taken by ISIS or when the price is extortionately high, sometimes up to and including one’s own children, as Johnnie Moore, author of ‘Defying ISIS,’ described. It is used by ISIS as a license to rape, enslave, and pillage.

Shea further stated, “At the same time the Secretary of State’s staff has contacted our organization and asked for a deal on word-smithing, asking if it would be possible to designate ISIS’ actions as ethnic cleansing or crimes against humanity rather than genocide.”

The panelists decried such word-smithing, vehemently reiterating that genocide is happening and the importance of using the ‘g-word’. They also pointed to evidence in the report, which includes the names of the more than 1130 Christians that have been murdered in Iraq from 2003 through June 2014.

“The report has unearthed many stories that the world has not heard,” Baaklini said in his statement announcing the release. “Like the story of Christian women who have been forced into sexual slavery and listed on ISIS slave menus that put a price on ‘Christian or Yazidi’ women by age.” Baaklini continued, “Stories of women like Claudia, who was captured and raped several times after ISIS militants spotted her tattoo of a cross. Or like Khalia who fought ISIS militants off as they tried to rape captive girls and take a nine year old as a bride.”

Panelists who have recently visited the region described wholescale and systemic elimination of Christian practice as well as the genocidal crimes they witnessed.
“I went to Iraq three weeks ago and met a three-year-old girl whom ISIS members had thrown against a wall. She can no longer talk. Where was her father? He had been murdered as he was a Christian,” stated Juliana Taimoorazy, an Assyrian Christian and president of Iraqi Christian Relief Council.

“At the same time I am witnessing the complete elimination of my nation, the Assyrian nation which is over 7000 years old, one of the first nations to convert to Christianity over 2000 years ago, though the ministry of St. Thomas the apostle. My language, Aramaic, the language of Jesus will be erased and no longer heard.” Shea affirmed Taimoorazy’s description of the crisis.  “There are no open churches, priests or clergy in ISIS territory and no right to practice,” Shea stated. And Father Dankha, a priest from Erbil, said that if the “United States waits any longer to designate the genocide none of my people will be left.”

Bishop Angaelos of the Coptic Orthodox Church held up the report showing the audience the cover photo of the 21 Coptic Christian men who were beheaded by ISIS in Libya, lamenting the loss of his fellow believers, and said that “if we exclude Christians from the genocide designation we risk putting them at greater risk.”

Dr. Gregory Stanton, president of Genocide Watch and former president of the International Association for Genocide Scholars, reiterated that ISIS’ actions must be identified as genocide, not only because it is true but also because of the impact of the word itself.  “The word ‘genocide’ packs moral force and requires action from our government, which seems unwilling to truly confront ISIS,” said Stanton.  He continued “We refused to use the word in Rwanda and it resulted in 800,000 victims of genocide. Yet when we used the word with regards to Kosovo and Bosnia, swift international action followed, which ended the killing.”

Professor Robert Destro supported Stanton’s position. “What we have is genocide denial,” said Destro. “It happened in the 1930s, it happened in Cambodia, in Darfur and Rwanda. How long will it take for genocide to be declared in this case?” 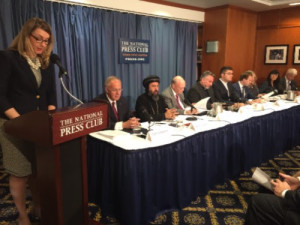 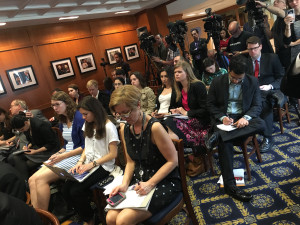 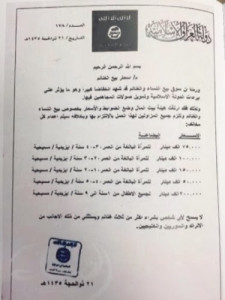 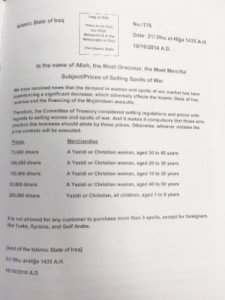 From the Genocide Report by IDC and the Knights of Columbus: ISIS Released Document on Prices of Selling Spoils of War. Includes prices for selling Yazidi and Christian women that were never shared before.

IDC President Toufic Baaklini, Executive Director Kirsten Evans, Director of Media and Communications Ninar Keyrouz and Director of Government Relations Kristina Olney are available to answer questions including the below on the Christian genocide report.