On this Holy Day, Don’t Forget to Help the Christians in the Middle East! 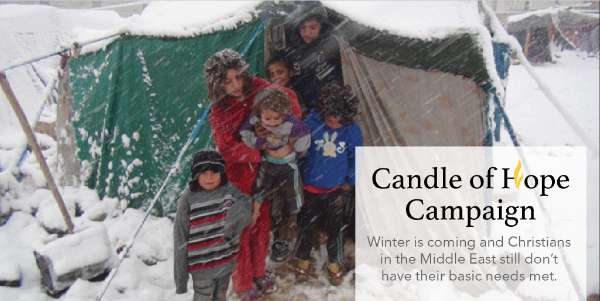 As you welcome 2016, do not forget about those in need!
Light a Candle of Hope for persecuted Christians in the Middle East this Christmas. Take Action to bring them a brighter New Year.

What Can You Do?

Pray: Launch an ecumenical prayer service in your area for Christians in the Middle East. Find out how by visiting our Candle of Hope campaign website: ActWithIDC.org..

Act: Mobilize your church and local community and organize a town hall meeting to raise awareness and political action for Christians in the Middle East. For information on how to do this, visit ActWithIDC.org..

Give: Donate to IDC’s toy and food drive to give displaced Christians a brighter Christmas and New Year, at ActWithIDC.org/give. Raise money within your community and organize a fundraiser such as a church or community bake sale, car wash, or dinner.

Christians are being targeted for extermination.

Since the advent of ISIS in Iraq and Syria, hundreds of thousands of Christians and other religious minorities including Yezidis, Turkmen, Sabea-Mandeans, Kaka’e, Kurds, and Shi’a, have been targeted for extermination and forced to flee their homelands. The mass murder of religious minorities living under ISIS is nothing short of ‘genocide’.

The centuries-old Christian community is disappearing from Iraq almost entirely.

According to some aid organizations working in the region, there could be no Christians left in Iraq in five years if nothing is done to stop these atrocities. We must act now.

Christian history is being wiped out.

Christians had been living in Mosul, Iraq since the time of Christ. But since 2014, all of the Christian institutions in Mosul, including churches, schools, and monasteries, have either been destroyed, occupied, converted to mosques, converted to ISIS centers or shut down.

Christians are vital to the stability of the Middle East.

Christmas is coming and Christians in Iraq and Syria don’t have their basic needs met.

It’s been fifteen months since 125,000 Christians were expelled from Mosul and the Nineveh Plains in northern Iraq by the Islamic State. Since then, they are refugees in their own country and are living in temporary refugee camps in the northern Kurdish part of the country.

For more information on how to help, visit ActWithIDC.org.