I am lost for the words to express the depth of the emotions I am feeling right. My

name is Rita Tamur. I am from Qraquesh in Northern Iraq. I arrived here on

I had to flee my home on August 6th, 2014, because we were threatened by ISIS.

My friend, Sally, is also from Qraquesh. At first, we escaped to Arbil, Iraq, where

we were able to find shelter. My family was so worried about me because of all

the abuse the young girls were experiencing. So they decided the best place for me

was Lebanon. My friend’s family relocated to Turkey, looking for a safer place.

I am here in Denver, taking English classes with the hope of entering a University

next semester. I feel guilty and unworthy that today I am here in the United States

and all my friends and family are facing death every day. To make matters worse,

today November 17, my friend Sally posted pictures of her family. They were

traveling from Turkey to Greece through the Aegean Sea by a rubber boat. All

seven of her relatives drowned. Here are the names and ages of these people who

lost their lives as martyrs: STEVEN and his wife SELVANA, who were both 26

SAMAH, 32 years old died with two of her four children, MARVIN, her 7 years

end up dying this way.

I feel unable to do anything by myself. Therefore, I am reaching out to all my

how Christ may be asking you to help.

Photos of the Martyrs:

Here is a photo of STEVEN and his wife SELVANA (26yrs), their two children 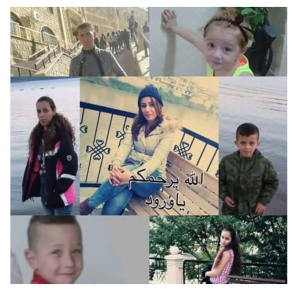 What did Angie do to deserve death?