Gift IV: The Christian Children of Egypt pay off the Tax Price (Al- Jezya) of the Faith: Blood and martyrdom.

Early on Friday, May 26, in Minya, Egypt, (the High Said rural Region of Egypt), one Pullman Bus carrying 35 children, one Business mid-size Bus carrying 15 workers, and one car carrying an entire family, were faced by 10 gunmen from a Muslim Brotherhood related jihadi group who opened fire.  Thirty-two children were executed.  Three children and the teacher are in critical condition in Naser Hospital in Menya. The jihadis killed most of the workers on the second bus and killed the entire family in the car.

That morning, I spoke with our envoy of our Apostolate of Our Lady of Hope, The St Rafka Mission of Hope and Mercy in Cairo.  The envoy told: “Abouna (father) our kids here have paid the Tax price for the Faith in Christ. It is the eve of the beginning of Ramadan for the Muslims and this is Friday, a day of prayer. This is the cost of the prayer.” 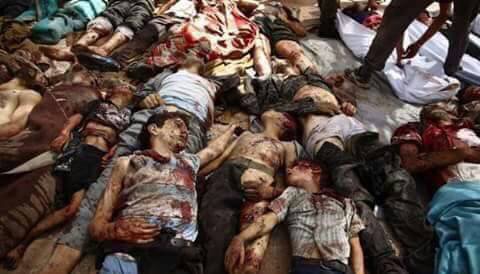 It is absurd and very disturbing to see that some kill for the sake of god while others offer themselves as innocent victims, as a token of redemption to a God who is all Love, Salvation, Peace, Forgiveness and Life.

According to my sources, earlier this month, on May 24, 2017.  The terrorist militant Hasam movement, which is a disenfranchised Muslim Brotherhood element, released a threat of attack against the infidels and disbelievers (the Christians and westerners) entitled, Whiz of Bullets.  The attacks were to have been scheduled for May 24, at the 19th hour.

An advisory message has been sent by email and via phone messages to the Coptic Pope Tawadros (who happened to be on Pastoral Trip to Moscow to meet with Patriarch Cyril of the Orthodox Church of Russia), our Maronite priest in Cairo, as well as many bishops, Western Embassies, and many Christian individuals all across Egypt. They all have received emails and text messages to their phones warning them of a “Credible threat to attack churches, western clubs and the disbelievers, children of the crusaders who are polytheistic infidels”.

Friday was a day of No Work in the Muslim world and a day of worship. This is a day where Christians in the Said region have also developed a tradition of going on pilgrimages to the oldest monasteries of Egypt.

I was there last summer. I visited the area of Deir El-Tayr (The Monastery of the Bird) near Minya. The Monastery, tradition and archeology tell us, is the place where the Holy Family of Bethlehem stayed during the fly to Egypt, when Herod had slaughtered all the Children of Bethlehem looking for the “New Born King of Peace,” Jesus Christ. This region is also the home town of the 20 Coptic young men (now Martyr-saints) who were slaughtered by ISIS in Libya two years ago. I went there and I visited with the children of the Coptic martyrs, who are now not only orphans, and their mothers not only broken hearted widows, and their parents not only hurt in their souls with a sword of hate and persecution, but most of all they are now the Gift of the pure Blood who is offered on our behalf on the altar of Egypt.

The Gift of Martyrdom is at its highest when the slaughtered victims are the children of Egypt’s oldest Christian community.

My heart, and many around the world, has moved in compassion and in sympathy last week also for the victims of the Manchester attack in Britain. I thought the world around us will learn and will think. I assumed that the parents in the Western world have realized that Attack against the Western children is an attack on Christianity in the world. But not all got it.

All of us have different opinions. But my message is this: Children and the Christians of Egypt and the entire Middle East, are dying for their Faith in Christ as Lord and Savior. It is time for us to either acknowledge and care or to continue ignoring the fact of evil, and delay the response of giving hope and putting an end to this act of Slaughter.

There is nothing more cherished nor closer to the Gift of Redemption we have all received from Christ as the Innocent Lamb of God, then the Innocent children who are being killed for the sake of His Most Holy Name. It is our sacred duty to protect them and to tell their stories.

The Children of our churches in Egypt refuse to stay home even though they were told, “Stay Home or we are going to kill you.” Instead, they were on a bus, praying, praising and telling Jesus their love and their need for Him. It is absurd; the silence of the Media, the silence of the Christians here and everywhere.

Pope Francis told Pope Tawadros, the Children of your Church are doing the “Ecumenism of the Blood.” Which means they are dying martyrs for the Unity of the Church. I cannot imagine that still, today, Christian denominations in America are divided and not working enough towards unity and holiness. 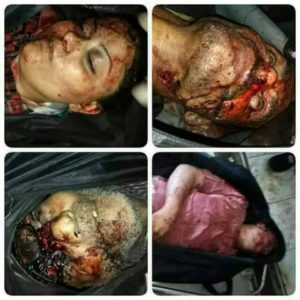 Of course I have read the messages and the warnings that came from Egypt to me. I also have copies of the Campaign article that the IS (Islamic State) had released in an interview with its leader in Egypt done back on May 4th 2017, in their 79th issue of their weekly telegrammed paper called: “Al-Naba”  (The Latest News).  Yet my worse fear is that our country’s Christians have become cold in their heart, cold in their faith and suspicious about Christ’s power and his Act of God.

God will act. Children who are murdered one-by-one in a shower of bullets, will call upon God to come and act. The Act of God is Anger called Justice. The compassion of God will sweep the world of the silent yet reveling wolves whose open jaws are seeking to devour the souls of the followers of Christ.

My message to you all today is this: Our Children are the Gift of Innocent Life that is being offered so we can keep proclaiming the Good News of the Gospel in all the world and to all creation and to all nations. Your silence and your lack of holiness, the lack of your engagement in protecting life, and in proclaiming the Gospel, will turn their blood like the Blood of Abel in the Book of Genesis: “The Voice that calls to God for Revenge”. Their blood is pure. Their blood deserve our repentance and our act of Faith, Hope and Love.

Be Christians again, or wait, for the hand of God just like Cain. Cain, after he killed his brother Abel, had been marked with the mark of death and shame and even when he hid in the bottom of the darkness of the Earth, the eyes of God were there looking at Him for judgment and accountability.

Little ones of Egypt, moms and dads of our children of Egypt, young men and women of the Faith in Christ in Egypt, in the Middle East and all over the World I salute you in the Spirit of Martyrdom and Witness. I salute you and ask you to beg Christ’s forgiveness for us for all of our sins and our evil silence.   “The Holy Spirit when united to us, makes us not only men and women, but the Living Children of God”

At least you are now with Christ in Heaven receiving the crown of Glory. I have a feeling that what is coming to us here on earth, is going to be a valley of tears and of fear. We will wish to die but death will not come to us. We will face our shame and our lies, we will face the darkness of hate and the monster of persecution.

My recommendation to the living brothers and sisters in my parish and beyond is this: It is time to connect back to the Church. The Bride will come and the doors will close. Woe to those who will be left behind, for the second death is awaiting them. The place where Satan and all his army will be put for eternity.

My recommendation is that we all come to Church and pray on this weekend of Memorial Day. My recommendation is to offer Mass for the souls of the martyrs of Egypt and the innocent victims of Manchester. On Memorial Day, please attend the 11:00 am. Archbishop Aquila will celebrate in the open at Mount Olivet Cemetery. In the Afternoon at 3:00 pm, we are all asked to pray. Pray for the Divine Mercy. Pray for the Triumph of the Immaculate Heart of Mary, pray for the Peace of Christ to reign in the world. Pray for the conversion of the Muslims to Christ as Savior and Lord. We have been called to preach His Holy Name and after what I have been seeing I can tell you, They definitely need Jesus in their life. We too need to invite Jesus back into our hearts now, not tomorrow. Do not delay this call.

In a commentary on the Gospel of Saint John, Saint Cyril of Alexandria, a Father of the Church from Alexandria, Egypt, declares: “If we have given up our worldly way of life and submitted once for all to the laws of the Spirit, it must surely be obvious to everyone that by repudiating, in a sense, our own life, and taking on the supernatural likeness of the Holy Spirit, who is united to us, our nature is transformed so that we are no longer merely men, but also sons of God, spiritual men, by reason of the share we have received in the divine nature.“

My dear brothers and sisters in the Lord Jesus Christ, It is a fact of life that life is a passing life. All goes from birth to death. Only One and the Only One: Jesus Christ, as the Only Son of the Living God, Savior and Redeemer, came down from Heaven, was born unto us in the flesh, died for our sins and rose from the death. Only He, we know, ascended into Heaven and is seated at the Right Hand of God the Father. This is what we celebrated this past week during the Thursday of the Ascension of Christ to Heaven in both his resurrected Body and in his full Divinity.

Christ was in full obedience to His Father in Heaven, therefore Christ defeated death and He ascended into Heaven in full Glory.

We, too. We have received Jesus in the Flesh, we have drank his blood of salvation, We are now His Holy Temple, We are His Holy and Mystical Body for the Life and the salvation of the world.

Unbelievable: The Children of this bus in Egypt reminded me of the Children of Rome in the Early Church, where Nero, while he crucified their parents, use to sprinkle the children in blood, and let the beast devour them in the arena of the Circo Massimo in Rome. This was the best entertainment Nero offered to the Citizens of the Great Empire.

Unbelievable: America now is being entertained in the blood our little children of Christ in the Middle East and elsewhere. Please Wake up. Please Act. Please Pray. Please Repent. Please tell their story. Please contact your public officials and tell them to help!

Otherwise remember, The Day of Judgment will come, and God will be the Judge.