In Matthew Chapter 8: 19-20 we read: Then a scribe came and said to Him, “Teacher, I will follow You wherever You go.” Jesus said to him, “The foxes have holes and the birds of the air have nests, but the Son of Man has nowhere to lay His head.” 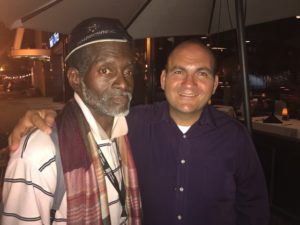 Earlier this week, while in Washington D.C. to educate and inform people about the Plight of forced Christian immigration, refugees, religious persecution and human trafficking of children, sex slavery of women, and young girls and boys, I got to a point where I really needed to take a break and sit at a street corner, eat a little and reflect. Doing this, it started raining. I decided to stay outside, hid under a little umbrella and continued eating and reflecting. People passing by, in hurry, under the rain, seeking refuge. All of a sudden there was this one man, a black male in his upper age, no teeth in the front, walking slowly as he is so well acquainted with such situations. He approached me and asked for money. I answered: Would you like to eat? He looked at my plate, and he goes: “Ooo, is this mashed potato?” I said: “Yes it is.” I shared my plate with him and we had a wonderful evening together talking about God on the Streets of America. Robert Williams is his name. The very first thing he taught me is this: “More important then knowing who I am, is to know whose I am”. Then he goes: “Father, to go through life we have to learn how to grow through life. God builds us our assignments in this life. However, we still have to learn how to accept and carry on our assignments. In this we will find both our joy and our freedom.”

Then I asked him: “So do you accept Jesus Christ as your Savior and Lord?” He goes: “I do accept Jesus as my Savior.” At this point, I set him at table with me; we were in a place near the White House. Our meeting carried through dinner at a local restaurant off of 16th Street in D.C.

I ordered a ginger ale for him as he requested. I learned that he too, had to take stomach medicine for acid reflux. So I sympathized with his care for himself when he said: “I have to eat slowly and in little portions.” While he was eating, I kept asking him if there is such a thing as “the homeless spirituality and the God of the homeless”.

He told me: “Father, when people ask me to get away from their places because they don’t know who I am, I hear them saying to one another: Don’t look at him and he probably will go away. Isn’t this how people sometimes treat God? As if he is not? So, I do sympathize with God for being rejected and being treated as the unknown. But he is the Gift of my life. He provides me with good people who enable my survival and help me to say at least three times a day: ‘God bless you.’”

In fact, my dear brothers and sisters, this is how I learned that faithful people, even homeless, keep the prayer of the hour. They say three times a day hopefully in the morning, at noon and in the evening: “God bless you.”

So I asked him: “Then do you walk away when they ignore you intentionally?” He replied: “Lots of times, I feel pity for them, really, and I take a moment and say something to them before I leave.” I asked “Like what?” He said: “I say something like this: ‘I know I am the invisible man but this is something good.’ I can do a lot being the invisible.” I asked him to explain. He tells me: “Well lots of times people have to lie and then will feel a deep guilt when they ignore me. I have to make them feel light and jokingly tell them: I am in a better spot then them: The claim not to be, but I am the nothing, the no one who is not. This makes me feel no guilt, and I am in a better conscience position than them.” I said: “Robert, isn’t this a judgment on them?” He answered me: “No Father, it is mercy.” I ask, “Why? How is this being mercy?” Then Robert explained to me the following: “Many people are afraid and our presence or smell or the look of our outfits create a fear and guilt inside their hearts. I just try to tell them: It is not your fault that I am like this. I invite them saying, ‘Don’t be intimidated by me passing.’ You don’t have to start speaking loud or look everywhere else in order not to notice me. You can always say “Hi”, or “hello”, or reject me, or just acknowledge my presence, or say: “God bless you.” I believe your wish to me for God’s blessing is a good offering too.”

My dear brothers and sisters in the Lord Jesus Christ, I pray from all my heart that none of you will ever experience the life of a beggar. The life of the homeless. In the history of the Church, Saint Francis, and before him many of the Eastern Egyptian monks in the early church, and in the Church of Antioch, have practiced begging and walked as the “troubadour,” pilgrims in villages and through towns. Many left their homes and never returned. They wanted to be the strangers who heal others through Christ. They were mistreated in many occasions. But in all occasions they were the gift of God to many strangers who needed them.

In our life as Christians, we meet or ourselves we experience the reaction of character based on fear, because of hate, because of guilt. Why is this? It is simply because we ourselves miss our Father. We miss God and we know that nothing in this life can substitute for Heaven being our Eternal Home. This is why Jesus said to the one who wanted to follow him: fox have homes, but the Son of Man has no home.

Lots of times we overthink situations because of hate, of revenge, or based on guilt. I see many people think they need to do too much. Robert told me: “Father, I never ask for too much. I am not high maintenance. I just do not want my suffering to go unnoticed, nor my life to die and end on the street. No human being deserves death on the street and not being buried properly and with prayer.”

In fact, since my life in Rome, I always made a pact to feed one homeless person a day. If I had change, I would give the only change I had, but most of the times I preferred not to give money, rather food, or find them clothing or place to stay. Lots of times the needs of homeless people are so minor compared to what most people end up spending every day.

I ended up learning that Robert is an educated man. He writes a column called: Perception or Reality by Robert Williams. His acronym that leads his thinking process is called: FACE: Focus, Attitude, Commitment to Excellence. My dear brothers and sisters, this is the dream of a homeless American, who is a Marine veteran. Robert served in Japan as an “E3 over 3”. A Marine term for rank of Lance Corporal with over three years of service. Robert served for 4 years. Twice deployed to the Far East during tough times in the history of our nation recently. During 1978- to 1982.

Robert, being a Black man, told me: “Color must not deny accessibility. Whether to human rights, to social justice, to dare to advocate, to pay taxes or receive benefits. America needs to be a Human Right Country. On the contrary, in our Nation’s capital in D.C. We find that we are over 8000 homeless on the streets of D.C. What does that tell you?” Of course, the homeless people, along with other categories like the children and women inside the inter-cities, are people who are used and manipulated. No American should die on the streets of America from hunger or from cold, of from the lack of medical assistance.

I learned that all of us are suffering human beings. Such a realty is both a systematic and epidemic ongoing crisis in the world.

Today, we celebrate the Gospel of the sending off of disciples to go preach in the world the Good News to all people and to all Nations of the Earth. Such a Mission left the Church as the Mystical Body of Christ on pilgrimage in the world. We are the homeless Christ on the streets of the dark world. Therefore Christ told us to go out as the Light of the World. To go out as the Salt of the Earth.  Powerful is the message of Christ to His Church. It is imperative to empower, again, the millennial generation with the love for Jesus and for the Church. In fact, on a negative fear, this is why the millennial generation is detached from the humanity of Jesus. They don’t relate to Jesus; not in the flesh no more in his Divinity. The pain and the suffering, the mission, the miracles, the teachings of Jesus do not have meaning to them. Jesus is the hero of this homeless man, is the Hero of the persecuted and hopeless Christians that I came to D.C. to advocate on their behalf. Yet, by choice, we Americans, Christians and others, we choose to deny them dignity and hope. WE choose not to act in order to protect them and make them share the generosity of God in peace and in Joy.

In this time, where Christianity in the world is at the verge of a major persecution, a global one, and when the world is falling for false sympathy and for the lack of knowing truth from lie, good from evil, light from dark, holiness from viciousness, We need to rise and keep rising until the Name of Our Lord is again worshiped and glorified. For He is our Hope, He is our Refuge and in His Father’s Home there are many rooms (John 14:2) waiting for us all as Jesus tells us.

My hope and my salvation is the Lord, and I know I am no orphan. For today, as I celebrate my 16th anniversary of priesthood, I renew my self-saying with the Lord: “Do not Be afraid, for behold, I am with you always until the end of the ages.” (Matthew 28: 20)